Anniversary discount: 2 years of Sawayo - celebrate with us and get a 20% discount!

Anniversary discount: 2 years of Sawayo - celebrate with us and get a 20% discount for the first 6 months!

How Sawayo avoided a hefty fine

An interview by Katharina Gruber with Verena Lenzko, Managing Director of calor systems gmbh and Sawayo customer since autumn 2020. 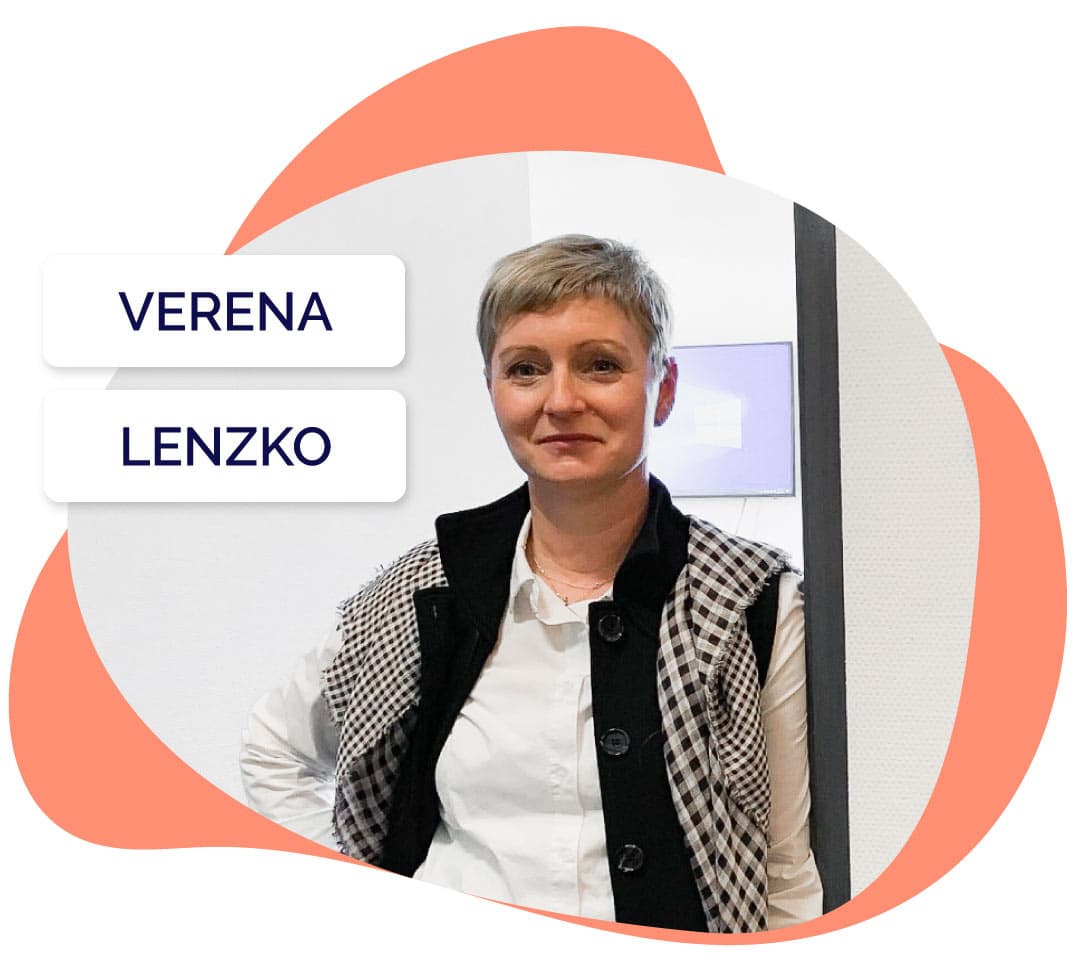 "And even though I kept asking her in staff meetings how she was doing and if she was comfortable in her job, she didn't say anything.

And then I got her resignation .

Evening.
Via WhatsApp.
On the couch.
And that was just the beginning."

"You don't want to experience that as an employer"

When we talk to Verena about her story, her disappointment is clear. But one thing after the other.

Verena Lenzko has been a Sawayo user from the very beginning. In October 2020, she gets to know Sawayo as a pilot project, is thrilled that her suggestions are actually implemented and unceremoniously introduces the software in her company in January 2021.

In Berlin, she and her husband Robert run calor systems gmbh, a company that reads heating and water meters for property owners, installs smoke alarms and tests drinking water for legionella.

"I had people around me who were invested in me".

Verena is determined. As a "child of the East" - as she calls herself - she grew up in the former GDR, studied German and Russian to become a teacher in Erfurt. During her studies, the Wall fell. Although she suspects that she will not find a job as a teacher with her combination of subjects, she finishes her studies; subsequently she starts a commercial apprenticeship, works for a sanitary manufacturer for a few years and studies business administration part-time. At the beginning of the new millennium she moves to Hamburg and works in sales at Kalorimeta, today's contractual partner of calor systems. After a few years she becomes regional manager, responsible for contractors in the whole of eastern Germany, "a lot in the hotel, rarely at home". During this time she learns a lot. "I always had people around me who believed in me. Who invested in me. Who took me by the hand and let me run at the right moment. That has brought me a lot."

"I was sure that communication works better at eye level"

When a change of age takes place at the Berlin location, she seizes the opportunity and founds calor systems together with her husband Robert. "I had wanted to start my own business for a very long time," she tells us in the interview. "In the field service I looked after other companies and got a good insight into their management. I often thought to myself, 'Oh my goodness, what are they up to? There's got to be a better way!' And that's what I wanted to try." It's not just "doing better" and creating that attracts her to self-employment. Working with people and leading them also drives Verena. "During my time as an employee, I had very different experiences of how supervisors talked to me and worked together. I was sure that communication works better at eye level. That you can achieve more in a trusting relationship."

Verena feels very comfortable in her new role as partner and managing director She likes to work a lot and enjoys mixing her private and professional life. Many business partners are also friends.

After a few months, the employees express their wish for trust-based working time. Verena agrees. The previous working time recording via chip cards is cumbersome and time-consuming. "I wasted a lot of time completing and correcting employees' entries because the device didn't record them correctly or employees forgot to clock in." The trust work schedule model works well. During periods of high workload, the team pulls together; during quieter periods, colleagues leave their offices earlier. 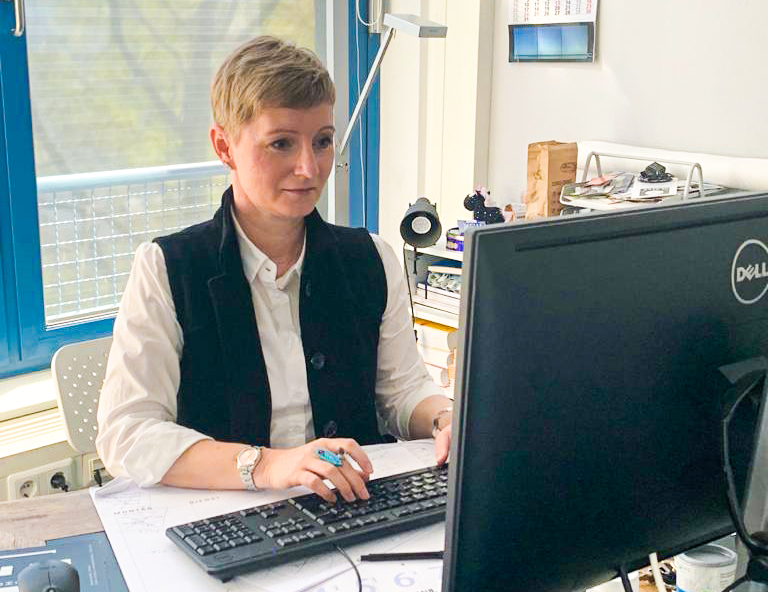 Verena Lenzko in her office in Berlin

"That was the biggest mistake I made".

Even as the European Court of Justice requires all employers to record their employees' hours in May 2019, Verena is sticking with the trust-based working hours model. "I was aware of the ruling and knew that I would have to record working hours again soon. However, I thought I had time to do that until the ECJ ruling was a federal law. That was a fallacy, after all."

Then Corona comes. The whole world turns upside down. Suddenly, employers have to deal with issues like mobile work, decentralized teams and short-time work. Verena discusses with her team how to proceed. She doesn't want to go on short-time work. "We wanted to keep people in reasonable employment and pay for as long as possible. We have single women with children in the team whose economic situation would have deteriorated significantly. And we too might have shut down." Together, they decide to implement a rolling work system: The previous working hours are suspended, and everyone is to take turns working weekends and holidays as well. Verena explains that this way there will be minus hours, but at least everyone will have work. "We decided this together. We looked each other in the eye and I remember very well how I said that I would do without a written agreement because I trust everyone. That was the biggest mistake I made."

"It made me feel sick. Like I was gonna throw up"

calor systems overcomes the first lockdown well. The whole team builds up minus hours, but Verena does not have to close the company. In autumn, she overhears in the corridor that one of her employees, Hannah (name changed by the editors), is writing applications. Hannah is responsible for smoke alarms in the customer service department. "It was a thankless job at the time. We had a smoke alarm in operation that was highly prone to faults. Customers were constantly complaining," Verena moans. In a joint conversation, Hannah emphasizes that she still feels comfortable and that she has no intentions of changing her employer.

A short time later, Verena receives Hannah's resignation. "What disappoints me so much about this is that she didn't tell me in person. Instead, she writes me where I can find her resignation on her desk. I've had similar experiences as an employer more than once."

After Verena confirms Hannah's resignation, she no longer sees her in the office. Hannah is on sick leave from this point on. When her employment contract ends, she still has some remaining leave. Verena writes to her that she will pay her this minus the accumulated minus hours.

Two weeks later Verena receives a letter from Hannah's lawyer. Not only does she demand payment for the entire remaining holiday (Verena has to book the minus hours as a business risk), she also lists more than two hundred hours of overtime for her client in a long Excel spreadsheet. A claim of more than five thousand euros. "That made me feel sick. Like I was about to throw up. I was so angry." For Verena it is clear that the overtime does not exist in reality.

Verena hands the matter over to her lawyer. He refers to the ruling of the European Court of Justice. Until then, such claims had to be proven by the employee; since 14 May 2019, the burden of proof lies with the employer, according to the ECJ. In the meantime, Verena has introduced Sawayo in her company - for a few weeks now, her employees have been recording their working hours simply by clicking on the mouse in their browser - but Hannah has not become acquainted with Sawayo.

On the day of the court hearing, Verena is nervous. Her lawyer points out Sawayo to the judge, explains that Verena has already introduced measures to comply with the European Court's ruling.

Although the obligation to record hours has not yet been included in federal law, the judge actually refers to the ECJ in his ruling. Nevertheless, he rules in Verena's favour: although she has to pay Hannah for the remaining days of holiday, she does not have to pay her for the more than two hundred hours of overtime. The judge stresses that he will show mercy before justice because Verena has shown good will. If she had not introduced Sawayo before the court hearing, she would have had to pay at least part of the overtime.

"I was incredibly relieved," even thinking about the verdict, Verena breathed a noticeable sigh of relief. "I wouldn't have wanted to pay Hannah a single hour of overtime. I wouldn't have begrudged her that fraud."

Since the incident, things have changed for Verena. "I've shed some of my idealism. I think much more entrepreneurially now." Verena still makes agreements together with the team, but puts them in writing and has them confirmed by her employees. "I only do everything with Read and Sign now. That's my favorite tool at Sawayo anyway. Despite having a home office, I can reach everyone with it. Everything is documented and archived."

Verena advises other entrepreneurs to document everything from the start and to take European laws seriously - even if they are not yet in German law books. "And it's best to get Sawayo right away, too," she says with a laugh, "that saves time, gives security and transparency."

We would be happy to present your individual solution in a personal demo.

Sign up for a personal product presentation with us.

Conveniently select an appointment in the calendar and we will show you in an online demo how Sawayo makes your everyday work easier.
Select date now